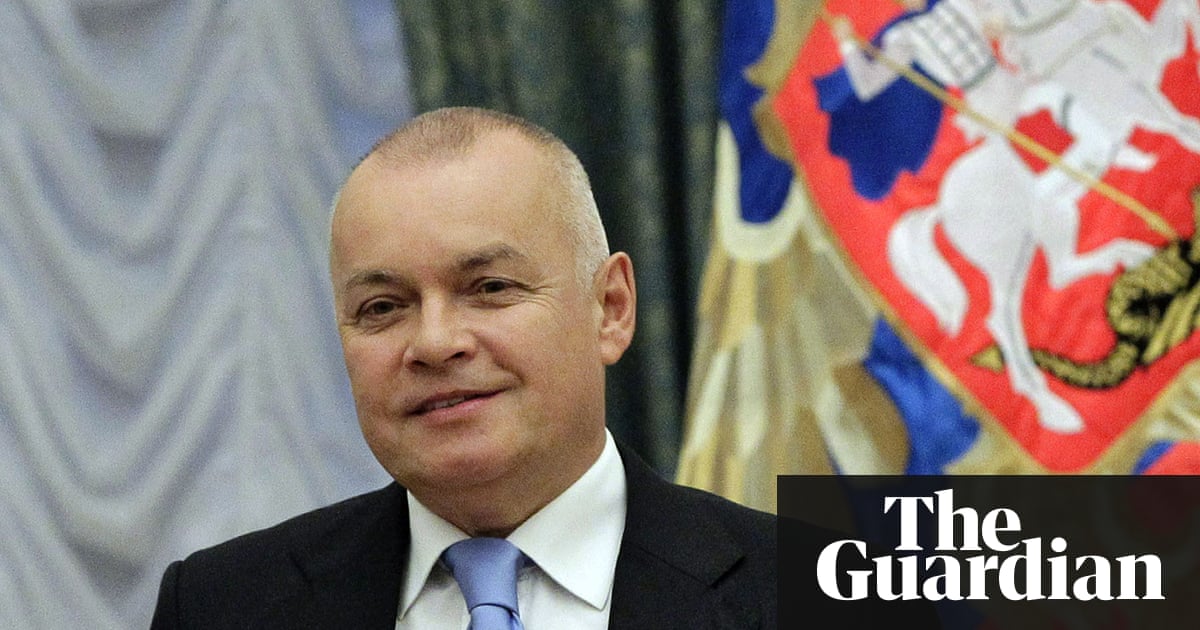 A leading Russian state news anchor has suggested Britain masterminded the poisoning of the former Russian spy Sergei Skripal and his daughter, Yulia, in Salisbury.

In a nationwide broadcast watched by millions, Dmitry Kiselyov, the anchor for the flagship Russia 24 news broadcast, Vesti Nedeli, said Skripal could have been sacrificed as a pretext for an international boycott of the 2018 World Cup.

Why not poison him? said Kiselyov. Is he so valuable? And do it with his daughter to turn it into a real tear-jerker for the public.

Russian state media broadcasts do not always perfectly reflect the opinions of the Kremlin. However, television station heads work in close collaboration with the government.

The remarks came before a meeting of the UKs national security council on Monday morning to discuss the response to events in Salisbury, amid speculation that Theresa May is facing pressure from some ministers to take a tough line if it is decided that Russia was behind the 4 March nerve agent attack in Salisbury that has left Skripal, 66, and his daughter, 33, in critical condition.

Before Mondays meeting, Tom Tugendhat, who chairs the Commons foreign affairs committee, told the BBC that the poisoning looked like it was state-sponsored attempted murder.

Kiselyov is sometimes referred to as Putins chief propagandist and been rewarded for his coverage with a primetime news broadcast and the leadership of Russias RIA Novosti news agency.

He is best known for telling viewers in March 2014 that Russia was the only country in the world that could turn the US into radioactive ash. Days later he was hit with EU sanctions tied to Russias annexation of Crimea.

In the broadcast on Sunday night, he said the poisoning of Skripal and his daughter was advantageous to the British, and would stimulate their Russophobia.

The poisoning creates a lot of possibilities, like an international boycott of the World Cup, being held in Russia this June, Kiselyov said. Its the perfect special operation.

On Monday the Kremlins spokesman, Dmitry Peskov, again denied Russia had any ties to the Skripal poisoning. It happened on British territory, and in no way is a question for the Russian federation, or its leadership, he said.

Despite official denials, Russian state television broadcasters have issued not-so-veiled threats about the dangers of settling in England, where a number of high-profile Moscow critics have died in recent years under suspicious circumstances.

Whatever the reasons, whether youre a professional traitor to the motherland or you just hate your country in your spare time, I repeat, no matter, dont move to England, the presenter Kirill Kleymenov said during a news programme on Channel One last week.

Something is not right there. Maybe its the climate. But in recent years there have been too many strange incidents with a grave outcome, he said.

Kiselyov on Sunday called England a deadly place. In the broadcast, a reporter suggested that the poison used in the attack on Skripal could have been produced at the British military facility Porton Down, near Salisbury.

They immediately tried to pin it on Russia, Kiselyov said. But if you think about it closely, the only people who stand to gain from the poisoning of the former GRU colonel are the British. Just to stimulate their Russophobia.

In a documentary film about Putin advertised during Kiselyovs programme, an interviewer asked if there is anything the Russian president cant forgive. Betrayal, he replied.